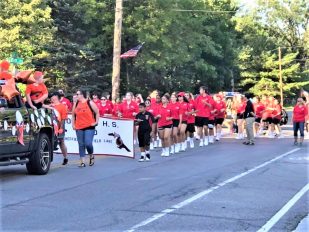 Sheffield Lake residents came out in droves to watch more than 50 units march from City Hall to Shoreway Shopping Center as part of 2021 Community Day July 9.

The parade stepped off at 7 p.m. with Sheffield Lake and Sheffield Village safety forces, led by Officer Keith Pool in the lead car. With sirens blaring and lights flashing, folks standing along both sides of Harris and Lake Roads stopped chatting with family members and neighbors to wave at police and firefighters and an honor guard. Sheffield Sheffield Lake’s Marching Band, accompanied by cheerleaders, pumped up the crowd with favorite tunes.

Trucks filled with t-shirt and cap-clad kids boasting the names of their teams were peppered throughout the parade. They, along with city officials and school board members, tossed candy to kids who lined the parade route. 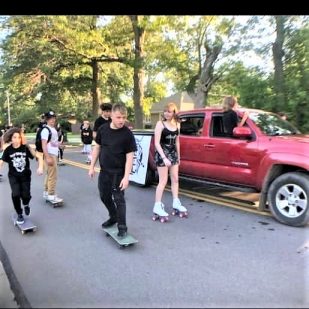 A group of skate boarders, led by Ed “Shred with Ed” Honse, were first time parade participants. Honse said the kids kept texting him to say how excited they were to be part of the parade.

At its conclusion, parade watchers shifted into place to prepare for a fireworks spectacle that did not disappoint. The fireworks were set off from the city’s boat launch, providing front row seats for those who filled the parking lot at Shoreway Shopping Center.